skip to main | skip to sidebar

Robert Damon Schneck, one of our favorite guests. returns with a new show and then a remastered version of an old favorite. First up, on July 23, he talks to Manwolf and Linda about Jeane Dixon, psychic to presidents and stars. Find out about Jeanne's uncanny history -- and how much of it is really true.
Then, on a classic Uncanny Radio (show 005 - remastered for better clarity) airing July 30, 2008, enjoy a smattering of Robert's best stories, including one about a poltergeist that converted to Catholicism, Pedro the Mummified Tiny Person, an electric machine intended to be God, a US president's connection to a vampire ... and perhaps Bram Stoker, and a Wisconsin tale so creepy that it defies description. Can you figure out the horrible "curse" that caused the first recording of this show to be "accidentally" wiped out by station engineers?

Robert Damon Schneck, America's Historian of the Strange, is the author of The President's Vampire, Strange-but-True Tales of the United States of America -- Anomalist Books 2005, Barnes & Noble 2007 -- as well as several books for young readers including Detective Notebook: Are You Psychic? He is freelance writer who contributes to Fate the Fortean Times and other magazines. Robert has carried out parapsychology experiments, participated in ghost hunts and visited odd places in search of stories. He lives in Brooklyn, New York, in an apartment full of books and silverfish eating the books. Friends describe him as a lovable, nocturnal, monomaniac.
Jeane Dixon Photo Courtesy of D.R. Shoop Photography, copyright 2008.

Program Note: During the 7/23 show, Steve mentions "Kreskin" as making outrageous predictions, none of which ever came true. In fact, the fake psychic Steve meant to name was Criswell. Kreskin, of course, is a justifiably famous mentalist and performer. Criswell was a "psychic" known both for his wild (and inaccurate) predictions and for his association with infamous film director Ed Wood. This mentalist mix-up explains why Manwolf's comment comparing Kreskin with Jeane Dixon met with resounding silence from both Steve's co-host and Robert. Sorry, Mr. Kreskin!
Posted by Stephen D. Sullivan at 12:15 PM 3 comments:

Working to Update My Site

Over the last week, I've been working behind the scenes to give my main site www.stephendsullivan.com a complete make-over, changing it to a more dynamic and easily updated site -- more like my blog, the Uncanny Radio blog, or Howls & Growls. The switch-over should take place fairly soon, though it will take a while for me to import all of the content from the old site (book links, interviews, etc.) to the new one. Keep checking back on my existing blogs for updates. Or why not subscribe to the blog feeds? It's easy. Just follow the subscription link on the blog page! That way, you'll be able to get all my ongoing news without looking for it.

Werewolf of Chicago - Or Holy Hill? 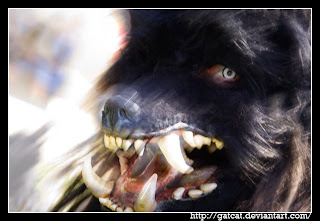 I met this cool woman with a home-made werewolf costume at WizardWorld Chicago a few weeks back, and -- with the bearwolf interview this week -- this seemed a good time to share a picture or two.

You can find out more about this suit and how it was made at:

If you drop Melly -- the artist -- a line, let her know you heard about her and her work on the Uncanny Radio blog!

And be sure to tune in this week -- either live, streaming, or on the podcast -- to hear about the amazing sighting of the "bearwolf" by Steve Krueger. See the post about the Holy Hill sighting below. 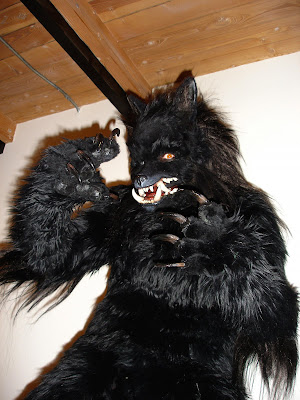 "Bearwolf" witness Steve Kreuger talks to Manwolf and Linda about his famous creature sighting near Holy Hill in Wisconsin. What did the creature look like? What actions did he take when he saw it? What was the police response? Krueger details all these things, plus a second strange sighting as well. Krueger becomes Uncanny Radio's first "witness" guest, as well as their second in-studio interview.

Krueger is a nationally syndicated "fishing and hunting" cartoonist with "Moose Lake." At the time of his encounter, he contracted with the Wisconsin DNR as a deer carcass remover. Our radio interview with him was filmed by a crew from the History Channel as we taped it, for airing next spring in a TV special on werewolves. Be sure to catch this treat!
Posted by Stephen D. Sullivan at 9:01 AM 6 comments:

Jim Grapek, president and founder of Associated Producers, Inc., a full service multi-media production company, is an award-winning documentary filmmaker. Grapek has overseen the production of hundreds of diversified programs for business, government and broadcaster, and has most recently specialized in the health arena. Grapek also wrote, produced and directed the first martial arts program to ever air on the Discovery Channel. The highly rated "Secrets of the Warrior's Power" was hailed by Black Belt magazine as one of the best documentaries on Chinese Kung Fu ever produced. Grapek decided to become a producer ­ to create positive programs that could make a difference in people¹s lives. After a successful transition into the industry, including a year spent as president of the International Television Association in Washington, DC, Grapek finally opened his own company, Associated Producers, Inc. in 1986, to fulfill his dream.

Since then, through his work and his affiliation with the National Press Club, Grapek has been privy to spend time with, film, and glean wisdom from many of today's great luminaries ­ people spanning a wide range of perspectives, and far too many to list. They include such people as Oliver Stone and Robert Redford, Margaret Thatcher and many political leaders, world class scientists such as Drs. William Tiller, John Haglin, Russell Targ and David Peat, religious leaders from here and abroad, new age visionary thinkers such as Deepak Chopra, Greg Bradon, Dr. John Mack and Zecharia Sitchin, and many leaders in the fields of healing and conventional as well as complimentary medicines. Jim's website ­ which includes information on the upcoming IMAX film, is www.associatedproducer.com. Jim can be reached at jgrapek@earthlink.net . Click on this link for the podcastof this Uncanny radio show.

Suppression Team). From 1979 to 1986 he re-enlisted in the US Army, but this time with Military Intelligence as an Intelligence Analyst with the Photo Interpretation Center in Seoul, Korea. Later Paul became an OPFOR (Opposing Forces) Soviet Threat Instructor teaching elite troops like the Navy Seals, Army`s Special Forces, Army`s Airborne Rangers on how to use a variety of Soviet made weapons. Paul has also been involved with the entertainment industry as a professional dancer and doing dancing appearances in movies and commercials during the 70s and 80s. Paul is now involved in the promoting of aspiring writers and artists who are trying to break into animation and comic books through his website Jazma Online! In fact his 1996 comic book The Legendary Dark Silhouette is being prepared to be made into a movie by independent movie producer Howard Nash. The first internet ad for the movie can be seen here. Paul is a freelance writer and has written travel articles, comic book reviews, and paranormal stories on ghosts and UFOs. Paul was recently a guest on the X-Zone, a Canadian paranormal radio show, discussing the connection between Military Intelligence and UFOs.
Posted by Stephen D. Sullivan at 9:49 PM No comments:

A Favorite Show from BTR